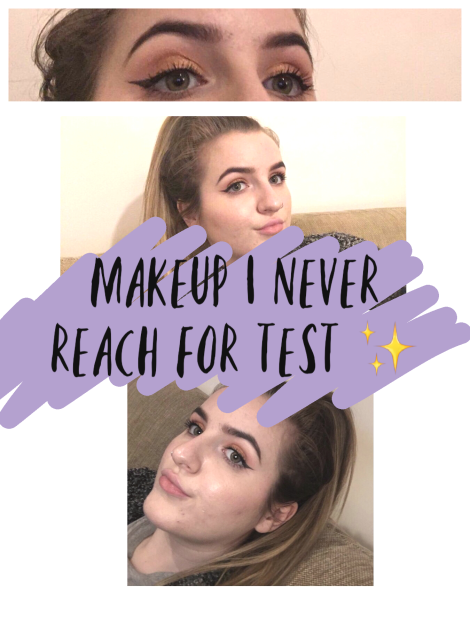 After realising I always reach for the same makeup and leave a lot of it untouched I thought I’d try using as much as I can that I don’t seem to gravitate too! Here’s what I thought.

I initially primed with MUA’s new primer spray, which has a lovely cucumber scent and is refreshing. I noticed it was quite tacky which I guess is good as it holds onto foundation. However I just didn’t like the sticky heavy feeling it left on my face.

For foundation I picked out Revolution Makeup’s conceal and define foundation which is from the same line as the well-talked about concealer, i picked up the shade F1 which was a pretty great match for me and not too light or ghostly. I noticed that it blended in like butter especially with the dense brush i was using. It has a dewy finish but can be set down to be matte depending on the finish that you want. I found the coverage to be medium but buildable especially in problem areas.
However, I’m unsure if the primer or foundation broke me out as when i took this off later on at night i had broke out in some rather huge spots which wasn’t fun. I’m hesitant to try these products again because of this..

For brows I decided to venture back to Summer, when I used this brow product almost daily. The Benefit Ka-Brow pomade, in shade 3. I forgot how fab this was!! It was the quickest I’ve ever done my brows and i loooooved how they turned out. It was smooth but really pigmented in a lovely way. I’m definitely going to reach for this more.

For contour and highlight I used ABH’s contour kit, and ABH glow kit (the lesser used shades, gumdrop and butterscotch).
I found that the contour went on more natural than i expected and builded up nicely, i liked how natural it looked compared to my usual contour/bronzer. I even used the banana shade in the palette under my eyes and surprisingly it wasn’t too dark! I enjoyed using these powders. I used butterscotch in the glow kit for highlighting but it wasn’t as blinding as the others, i also doubled up and used it on top of my eyeshadow look to add more shimmer to the gold.

Speaking of eye makeup! I used the matching concealer to the foundation, conceal and define – as an eyeshadow base. It blended amazingly and onto my eye but wasn’t the best eye base as the shadows kind of clung on and didn’t want to blend because of how wet the surface was.
For shadow I used the blood sugar palette, since buying it I’ve only used it a handful of times, i think because its so bulky and hard to open i just reach for my modern renaissance or huda as it’s quicker.
I applied cake mix in my crease with tongue pop and packed the colour donor, which is a gold onto my lid. It didn’t last very well throughout the day which may have been the concealer’s fault i used underneath. I found that the shimmers really faded and it looked like i had just used one shadow on my entire eye.

Lastly for lips I used Jeffree Star’s celebrity skin! I tend to go for lighter nudes and never reach for this shade, however it was lighter then expected and very flattering! I ended up mixing it with a lighter nude to create an ombré (it had come off entirely before taking these pics though!).

In conclusion, I’m abit wary of my base products, I loved the contour kit and brow pomade but i want to retry the eyeshadow palette with my PLouise base.

One response to “Makeup I Never Reach For Wear Test!”

Hi I'm Hannah from Manchester, England. I'm 19 and I love writing about my life, beauty and tips and tricks to help you out!
Follow Hannah O'Rourke on WordPress.com
Follow @hann_orourke